I have noticed that everyone has been over-reacting to the tidal wave for racial violence hitting the United States. Why do I say, “Over-reacting?” Police killing someone in cold blood, though it does happen and may have happened, may indeed be rare. However, it is not rare for there to be racially motivated violence.

Cops are shot all the time by black suspects during routine stops, so often it does not merit national mentions in the news cycle. Black men get profiled regularly. Cops kill unarmed men of all races. White people living in black and Hispanic neighborhoods routinely get intimidated and physically assaulted until they move out. Kids get beat up of every race for merely being different. And of course, blacks and Hispanics are the victims of racially motivated violence too.

None of this is ever going to change, because people do not change. We got rid of segregation with Brown versus Board, but elite schools now segregate students based upon race to “empower” them and self-segregation is beginning on college campuses. White men used to lynch blacks and Italians, but the mass shooting of white cops in Dallas and other racially motivated violence shows that lynching exists, but by another name. Hiring and admission practices used to take qualified blacks, Asians, and Hispanics and deny them positions that they earned. Now, schools still have racial quotas, but they limit the amount of Asian and working-class white students. Black and Hispanic applicants to the New York Fire Department failed the civil service exam (with scores as low as 25 percent) while white men with seniority have been laid off to maintain recently hired racial minorities.

Am I writing this to complain as an angry white man? No! To do so would be to miss the whole point.

There is one surefire way to change man. It is not via Supreme Court decision. It’s not by looking at all of the hypocrisy you see in the above and being careful to take the middle road. It’s not by electing Trump or Hillary. It’s not with education.

It’s with the Gospel. Men are dead in sin. There is none righteous, there is none who seeks for God. Not a single man will do what is right by his own standards, as men ignore their own conscience, let alone universal ethics. But the Gospel changes all of this.

The Gospel forgives wretched sinners like us. Christ came, lived a perfectly righteous life we could not live, and died in our place on the cross paying the full penalty for our sins. For all those that repent and trust in Christ there will be no condemnation, but rather a seal of salvation that cannot be taken away, the Holy Spirit. In Christ, you are a new creation, no longer a slave to your old ways of sin, but producing fruit such as love, patience, peace, and kindness by the prompting of the same Spirit. All those with the Spirit produce His fruit. 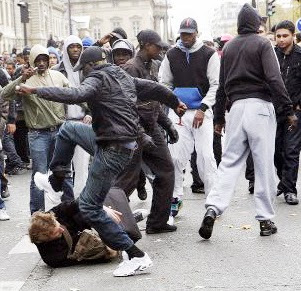 And so, it is by converting men to Christ that we change the world. As for men without Christ, expect more of the same. The racism, violence, and injustice won’t ever change because men cannot change apart from the grace of God. So, stop getting so self-righteous and indignant. Want to make a difference in this world? Preach the Gospel.

12 thoughts on “Short Comment on Christianity and Racial Strife”