I went to a wedding last night…it was fun I suppose. As fun as excessive drinking, which I don’t take part in, and dancing (same thing) can be. The wedding grounds were beautiful though. It had fireflies and a nice sunset, even though my wife and I were the only ones to walk outside and see it. 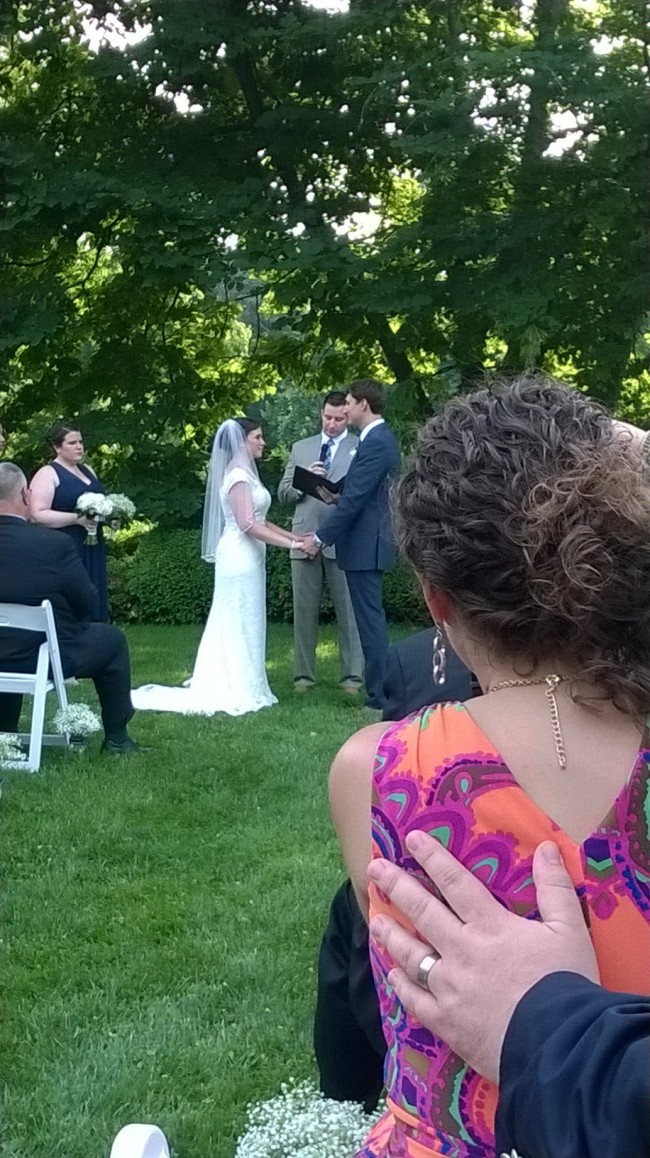 It just seems that the older I get, the more lame I become. These weddings are just boring to me. I just can’t enjoy them on any level aside for being happy for the people that are getting married.

Secular weddings comes across to me as meaningless. My own wedding is the only Christian wedding I have been to. It had a sermon, a hymn, a very touching moment where I shed a tear as my wife walked down the aisle, it was actually in a church…

The complete antithesis was my sister’s wedding, which was a traditional Shia Pakistani wedding. All I remember is my mother being shunned because she is divorced and my brother-in-law’s parents putting a headdress with a swatstika on my wife’s head.

Nonetheless, my friend Matt’s wedding was the neo-traditional no-religion, big party kind. It had a DJ, musicians as they walked down the aisle, and he and his wife read their own vows. Being that they have been living as man and wife for years already, there wasn’t a sense of anticipation in the air, but the bride shed tears and I do not doubt their love for each other.

Their pseudo-sermonette and the vows reflected the lack of meaning in this world apart from a saving knowledge of God. They all talked about love, but there is no mention of sacrifice, for they know not love as God did not love them first (1 John 4:19). Further, I thought, “I vow to treat you just as well as you treat me” was a tad disturbing, because if I have learned anything in marriage if we treat our spouses the way they often treat us, it becomes a downward spiral, really fast. Lastly, the sermonette’s exaltation of “love” as if she were a deity with fluff such as, “When you go through tough times, our enduring love will always prevail.”

Apparently, love exists outside of us, but the love is this imaginary entity that is almost like fate. I suppose the secular understanding is if you love one another, the love two people share is greater than the people themselves and it holds some sort metaphysical sway. Exactly what this is and how it works is never really explained.

Nonetheless, none of this is very far from the truth, because Satan likes to twist the truth into lies. Love does exist outside of us, but it is of God and made known to us by His Spirit in His Son. He loved us so much that though we continually turn our backs on Him and have heaped up judgment on our heads, He has taken that judgment and laid it upon Himself so that we may experience true love. There is indeed fate as He has set aside His people from their mothers’ wombs and so called them to their destinies of being vessels of mercy. Further, God’s love is an enduring and preserving force, for “this is the will of God, that I should not lose even one of all those He has given me, but that I should raise them up at the last day” (John 6:39).

It is because of God’s love that I can love my wife to any sort of meaningful extent.

One last observation, which I hope to flesh out in greater detail ultimately, is the reformed idea that every one of us would be “worse that Hitler” if God withdrew His grace from us. Usually, this theology is put forward to help explain double predestination while avoiding making God the author of evil. “All that God must do to harden anyone’s heart is to withhold His own grace; that is, He gives a person over to himself,” says Sproul.

When I am at this wedding, I see two young people really in love. I see friends and family with good intentions. I see a lot of people, if they do not repent from their wickedness, that will spend an eternity in Hell.

We don’t want to think about it this way, but the hearts of faithless people we think are “nice” are actually continually evil. God does not need to withhold grace to make these people “more bad.”

My point is, the people at the wedding and all their good intentions are no different than Hitler and his twisted view of good intentions. Anything and everything that “is not of faith is sin” (Rom 14:23). God does not need to “withdraw grace” as punishment, as if we had grace to start with, a concept I cannot find in the Bible (and would appreciate if someone can point me to it). “All our righteous acts are like filthy rags” (Is 64:6) apart from those we do in faith in Christ. All the good-intentions and love apart from Christ, that seems normal in the world, in alienation to God is wickedness. We should not be exalting anything as if it were from God’s grace when we have no evidence of it.

I think Sproul is wrong simply because in order to make his theology work, he has to assume that non-believers are active participants in God’s grace. While the Bible is clear that He makes it rain on the just and unjust (Matt 5:45) and He keeps all of us breathing every second (Job 34:14-15), nowhere does the Scripture detail that God spiritually supports non-believers at all.

Rather, the Bible paints a much different picture. We can see from creation itself that God exists and that we are sinners before Him, yet we turn our backs on Him. As judgment for this, God gives us over to depraved minds for punishment.

…which is known about God is evident within them; for God made it evident to them. For since the creation of the world His invisible attributes, His eternal power and divine nature, have been clearly seen, being understood through what has been made, so that they are without excuse. For even though they knew God, they did not honor Him as God or give thanks, but they became futile in their speculations, and their foolish heart was darkened. Professing to be wise, they became fools, and exchanged the glory of the incorruptible God for an image in the form of corruptible man and of birds and four-footed animals and crawling creatures. Therefore God gave them over in the lusts of their hearts to impurity, so that their bodies would be dishonored among them (Rom 1:19-24).

Hence, the picture I see here is of a people that don’t have any grace whatsoever and by virtue of that they should know better, deserve judgment, leading to God giving them over to lust as punishment. I understand that R.C. Sproul’s point is that these lusts that God gives people over to are “of their [own] hearts” and originate in the depraved nature of man. Nonetheless, God’s the one “handing over” the sinner to his own lust. He is an active participant.

So much for good intentions and romantic love divorced from God. How much more beautiful is God’s grace known to us in His Son Jesus Christ?