In a previous article I pointed out how Jerome, Cyril of Alexandria, and Athanasius all described the atonement similar to terms used by Calvin.

John Calvin wrote that Jesus Christ was “made a substitute and a surety in the place of transgressors and even submitted as a criminal, to sustain and suffer all the punishment which would have been inflicted on them” (Institutes 2:16.10).

In this article I will quote five more Early Church Fathers that said similar things to the same effect and issue a challenge. Is there a single Early Church Father that endorsed the “Satisfaction” theory of atonement, that being Jesus Christ satisfied the Father’s due need for honor? 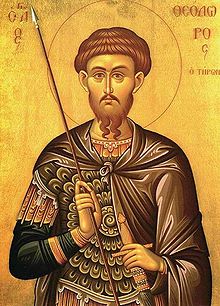 He bore the sum of human evils and every form of transgression, as well as their recompense and punishment. And as if he were our debtor, the only-begotten Word of God, coming into the world alongside us, fulfilled every law and all righteousness and did not stumble over sin but received it willingly so as to change our punishment into peace and harmony. For undergoing temptation he carried our rebukes and punishments, and by faith we make our own his suffering, and dying together with Him we are saved by grace. He was not delivered by force but by an act of obedience.

Theodore gets bonus points not only for plugging Penal Substitution, but fully endorsing the “Great Exchange” (i.e. the double imputation of Christ’s righteousness onto us and our sin onto Him.)

[I]t was always necessary to go through this whole sacrificial action because the addition of a curse to the commandment forbad any trifling with the obligation of the offering. It was from this curse that our Lord Jesus Christ redeemed us, when, as the Apostle says, “Christ redeemed us from the curse of the Law, being made curse for us, for it is written: Cursed is every one who hangeth on a tree.” Thus He offered Himself to the death of the accursed that He might break the curse of the Law, offering Himself voluntarily a victim to God the Father, in order that by means of a voluntary victim the curse which attended the discontinuance of the regular victim might be removed…Of which offering the holy Apostle thus speaks: “This He died once for all when He offered Himself up,” securing complete salvation for the human race by the offering of this holy, perfect victim.

You see how he proves that they are under the curse who cleave to the Law, because it is impossible to fulfill it…But, you may ask me, how I prove that this curse is not still of force? Abraham lived before the Law, but we, who once were subject to the yoke of bondage, have made ourselves liable to the curse; and who shall release us therefrom? Observe his ready answer to this (Homily 3, Gal 3:12)?

In reality, the people were subject to another curse, which says, Cursed is every one that continues not in the things that are written in the book of the Law. Deuteronomy 27:26 To this curse, I say, people were subject, for no man had continued in, or was a keeper of, the whole Law; but Christ exchanged this curse for the other, Cursed is every one that hangs on a tree. As then both he who hanged on a tree, and he who transgresses the Law, is cursed, and as it was necessary for him who is about to relieve from a curse himself to be free from it, but to receive another instead of it, therefore Christ took upon Him such another, and thereby relieved us from the curse. It was like an innocent man’s undertaking to die for another sentenced to death, and so rescuing him from punishment. For Christ took upon Him not the curse of transgression, but the other curse, in order to remove that of others. For, He had done no violence neither was any deceit in His mouth. Isaiah 53:9; 1 Peter 2:22 And as by dying He rescued from death those who were dying, so by taking upon Himself the curse, He delivered them from it (Homily 3, Gal 3:13)?.

Some people might point out, “Look, in bold Chrysostom said that Jesus did not literally pay the penalty for sins!” I consider this a misunderstanding of Chrysostom’s point. Chrysostom is just making clear that Christ did not personally accrue the curse of transgression, because He did not actually transgress the Law.  As Severus of Antioch states, “The One who offered Himself for our sins had no sin of his own. Instead, He bore our transgressions in Himself and was made a sacrifice for them” (Catena, quoted in Ancient Christian Commentary on Scripture, New Testament XI, p. 96). 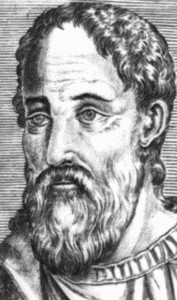 5. Eusebius of Caesarea, Proof of the Gospel quoted here.

[Jesus was] chastised on our behalf, and suffered a penalty he did not owe, but which we owed because of the multitude of our sins; and so he became the cause of the forgiveness of our sins, because he received death for us, and transferred to Himself the scourging, the insults, and the dishonor, which were due to us, and drew down upon himself the appointed curse, being made a curse for us.

As an added bonus, Eusebius wrote in Ecclesiastical History, Book X, Chapter 4, Par. 12, “But he alone having reached our deep corruption, he alone having taken upon himself our labors, he alone having suffered the punishments due for our impieties, having recovered us who were not half dead merely, but were already in tombs and sepulchers, and altogether foul and offensive, saves us, both anciently and now…”

In closing, my challenge to Roman Catholics: I just quoted eight Early Church Fathers in two articles, and there are more quotes. Without nitpicking that any of these quotes do not fully encompass what Calvin or whomever else said about Penal Substitution in one of their writings, can you bring up one ECF who wrote anything suggestive of the Satisfaction Model of the Atonement?

8 thoughts on “Penal Substitution in the Church Fathers: Part II”