In honor of the fast-free week of the Pharisee and the Publican (Luke 18:9-17), I would like to offer the following meditation.

Two men went up into the temple to pray, one a Pharisee and the other a tax collector.

The stage is set, where these two men, representing opposite lives, portray to us how we are saved by God and how our salvation can be lost.

The Pharisee stood and was praying this to himself: ‘God, I thank You that I am not like other people: swindlers, unjust, adulterers, or even like this tax collector. I fast twice a week; I pay tithes of all that I get.’

Further, the Pharisee’s prayer was sincere. He does not even credit, himself–but God! “God, I thank You!” There is actually nothing intrinsically wrong with his prayer, if it were not for the danger of pride latent in voicing such an expression of gratitude.

But the tax collector, standing some distance away, was even unwilling to lift up his eyes to heaven, but was beating his breast, saying, ‘God, be merciful to me, the sinner!’

The swindler, unjust, and adulterer was not just a figure of speech–it was the tax collector. The Publican was not just a Roman collaborator, but he was slave to all sorts of vices “from the dung-hill of passions.” (Matins, Canticle 1) Struck in the heart by “the extremity of his need” (Matins, Canticle 4), the Publican could think of nothing other than that the Pharisee was completely right.

How is it that the Publican went home justified, and not the righteous Pharisee, when the Pharisee’s prayer was accurate?

Our salvation is always balancing on the razor’s edge.

It was the inclination of the heart at a fleeting moment that did the Pharisee in. If he prayed the same prayer with lowliness of mind, he would have maintained his righteousness and added the righteousness of humility. But, with a proud heart, God loved Him too much to leave him in such a state and so he was to be humbled.

Let me end this meditation with a relevant story from Saint Nicolai of Zica:

[A]n old ascetic and renown spiritual father was dying and he called for a priest to administer Holy Communion to him. Along the way a robber joined the priest and desired to see for himself how a holy man dies. The holy elder peacefully received Holy Communion and peacefully talked with the priest. The robber then wept and said: “Blessed are you! Alas, what kind of death will I be worthy of?” The holy elder suddenly became proud and responded to him: “Be as I am and it will be to you as it is to me!” The robber returned along the road weeping all the time and lamenting over himself and, at that moment, dropped dead. Then the people saw a “fool for Christ” as he weeps over the holy elder and dances and sings over the robber. When he was asked the reason for this, he replied: “By the pride of that one [the elder] he lost all merits; the repentance of this one [the robber] he reaped all the fruits.” (Prologue of Ochrid, June 26, Reflection)

Beware of the razor’s edge and seek humility. The ascetic master lost his salvation as suddenly as the scoundrel gained his. The ascetic’s faith proved counterfeit only at the very end and the scoundrel, seeking to truly know God’s righteousness and not his own, proved real.

Faith saves because complete dependence upon God, a capitulation of the will so that one trusts only in His mercy and not one’s own righteousness, allows us to have the mindset of Christ. This is out salvation. “Suffer little children, and forbid them not, to come unto Me: for of such is the kingdom of heaven.” (Matt 19:14) The ascetic lived his whole life with this until the very end. The robber lived his whole life without it until the very end. This faith is necessary for salvation.

Saint Maximus the Confessor wrote, addressing himself in the third person, “By ‘faith’ he means the Kingdom [of God] possessing the divine form and goodness through works.” (Questions to Thalassius, Question 33, Scholia 1) These good works can be that of the Pharisee, as long as they are not undone by pride. They aslo can simply be the work of contrition, such as the Publican’s. Faith must contain goodness and true good brings us closer to God, like children to a parent. The Publican had it that day. The Pharisee did not.

Here is another story from Saint Nicolai which I think is relevant:

Can a sinner repent of his sins in ten days? According to the immeasurable compassion of God he can. During the reign of Emperor Maurice, there was a well-known bandit in the vicinity of Constantinople. He inspired fear and trembling both within the capital and without. One day, the Emperor Maurice himself sent the robber a cross as a sign of faith that he would do him no harm if he surrendered. The robber took the cross and surrendered. Arriving in Constantinople, he fell before the feet of the emperor and begged for forgiveness. The emperor kept his word, had mercy on him and released him. Immediately after that, the robber became gravely ill and sensed that death was drawing near. He bitterly repented of all his sins and tearfully prayed to God that He forgive him, as the emperor had forgiven him. He shed so many tears at prayer that his handkerchief was completely soaked. After ten days of weeping and praying, the repentant man reposed. The same night he passed away, his physician saw a wondrous vision in a dream: when the robber had given up his soul, there gathered around him black, manlike demons with pieces of paper on which were written all his sins. Two radiant angels also appeared. The angels set a scale between them, and the joyful demons placed all those papers on it, weighing down their side of the scale; but the other side was empty. The angels held counsel: “What shall we place on it? Let us seek something good in his life!” And then that handkerchief soaked with tears of repentance appeared in the hands of one angel. The angels quickly placed it on their side of the scale and it outweighed all the demons’ papers. Then the black demons fled, howling sorrowfully, and the angels took the soul of the repentant thief and carried it to Paradise, glorifying the man-loving God. (Prologue of Ochrid, October 18, Reflection). 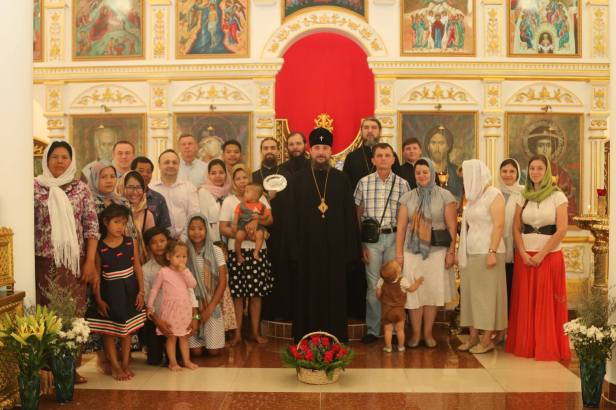 One thought on “A Meditation on the Pharisee and Publican”