I toyed with the idea of making a one page summary of all the arguments one can make that Augustine was not a Florentine Filioquist, but rather Orthodox in his Pneumatology. However, I have a fear of having more concise arguments, without their rationales and prooftexts, misused and quoted out of context. So, perhaps after my booklet-length treatment of the topic makes its rounds and people start grasping its arguments, I may at that point make something more concise. For now, I commend readers to seriously dig through Augustine and try to really understand the logic of the arguments I am making.

I do want to make the following comments, in no particular order. They will not make sense without reading everything I wrote, so they will only edify those who have actually read all the articles:

I am not going to be like David Bentley Hart and hide behind some lame excuse like all of this was a “thought experiment.” I can very well be wrong, I am a fallible human being. I submit to the teaching of the Church and as best as I understand it, Augustine is teaching that teaching and not the teaching of Florence.

I think it helps to compare and contrast the images of the procession of the Spirit according to Thomas Aquinas: 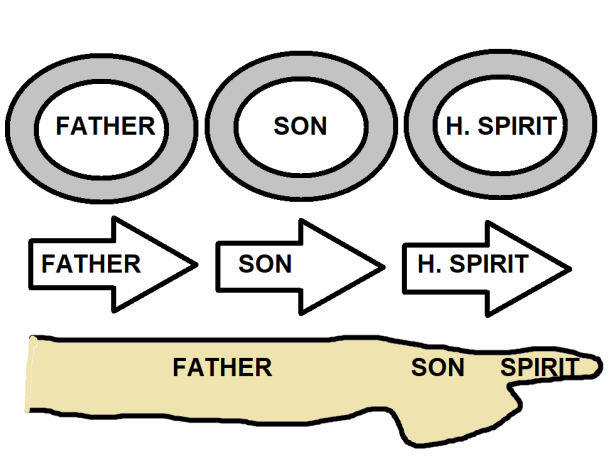 And the images brought forth by Augustine:

As one can tell, they are communicating two different things. Ironically, neither posit a “triangle,” which is the illustration usually devised by Roman Catholics as well as Orthodox in explaining their views. If anything, Augustine’s illustration is a sort of circle, where the Son is begotten as a separate action as the Spirit’s procession from the Father, and both actions complete when they meet each other.

I think it is clear to any observer that the preceding illustration is Orthodox and not Roman Catholic.

On another note, allow me to admit a bias. I would much rather read a saint as consistent with other saints than at odds with them. As an Orthodox Catholic Christian, the only saints I share with Roman Catholics are pre-schism. So, we do not share Aquinas, obviously.

People need to come to grips with the fact that Augustine’s theological enemies were not Eastern Orthodox, but Arians. So, if he is constantly reaffirming the Filioque, one must ask, “Why?” The answer is obvious. The Filioque conveys that the Father and Son share the divine essence. It disproves the Arians. The battleground was more over Christ than over the Holy Spirit.

I speculate that Augustine saw the temporal procession as indicative of the eternal procession. It is indicative inasmuch as it preserved the relational differences that Augustine surmised eternally existed. For example, when the Son gives the Gift of the Holy Spirit to man, this conveys that the Son shares the essence of the Father, in that they both give the Gift. Yet, in Book IV, Par 29, Augustine is clear that the Gift is from the Father and not the Son. Because we are so obsessed with the Florentine doctrine, we do not realize that the Filioque in such a context actually proves that the Father is the sole cause of the Spirit. Every time Augustine is affirming procession from the Son, he is literally affirming that the Father is the sole cause of the Spirit.

Why didn’t I make an illustration for the whole Gift thing? I never crudely made one simply because Augustine does not really give us a cogent way of understanding it. Augustine affirms the Father was eternally Gift Giver and the Spirit eternally the Gift from the Gift Giver. What exactly is the Son? We know He gives the Gift temporally and that He eternally shares this with the Father. Yet, Augustine rejects the Gift is properly from the Son.

In other illustrations, such as Lover>Love>Beloved, the relationships are easier to identify. They all speak of the Spirit’s role in the Son’s causation—which is ironic to say the least considering we in the modern day have the opposite obsession pertaining to how the Son allegedly causes the Spirit.

Augustine’s emphasis on the Spirit’s role in the Son’s causation should not surprise us. Being that the epiclesis transforms Bread and Wine into the Eucharist and the Spirit conceived the Son in the Theotokos, there seems to be a consistent strain of this which can tend towards a totally different, but not yet invented (thank God!) heresy—that of the Son not being begotten of the Father alone.

We must affirm that Augustine believed the Son was begotten of the Father alone, through the Spirit. But in all of this, how does the Gift-giving work in this scheme? I honestly do not know. I suppose, to give an extremely crude speculation, that the Father is the Gift Giver, He gives the Gift to the Son, who is the Gift Giver to man. Think of daddy buying a gift and then giving it to his wife to give to their children. Daddy is the cause of the gift’s existence, but the wife is too a giver, just not its cause. The gift is not properly “a gift” until it is given to the children. So too the Spirit, is not a Gift to man, until he receives it from God the Father through faith in the Son. The Gift does not have to wait to be given to be a Gift, though for the relative difference to be perceptible the giving must occur.

My last comment here is I find the Roman Catholic case from Augustine to be extremely weak. All of their difficult passages can be understood in a sensible way without mental gymnastics. One can simply quote Augustine to explain himself.

And so for those Roman Catholic intercolutors, if they even have the gumption, carefully consider my arguments and then oppose them only end up contradicting Aquinas and thereby the very thought intrinsic in the Uniate and Roman Catholic side during the debates at Florence—where Maximus’ Orthodox understanding was explicitly rejected. So, if one wants to backwards engineer Florence and turn it Orthodox by completely ignoring its underpinnings from Aquinas, be my guest. But this is intellectually dishonest and one must ask himself, what’s the point? If the fathers of Florence never imagined their words being understood as Maximus wanted us to understand the doctrine, then why not admit Florence is a robber council with Pneumatological heretics and recognize that the West had betrayed their greatest theologian ever who was in agreement with Maximus—Augustine?

I have far too feeble a mind to even be thrusting myself into this field of thought. My guess is there must be thus far untranslated or earlier writings which have identified all the same things I did, and so I am late to the party. If Saint Gregory Palamas was able to take the Love illustration from Augustine as is clear from Chapters 35-40 of his 150 Chapters, and he had a Greek translation of On the Trinity, my guess is he understood it the same way I did. But, much of Saint Gregory on this topic is still not translated, so I do not know.

Pray for me a sinner. And, God willing, what was written here will help strengthen the Orthodox cause and bring with it a genuine desire to venerate Augustine.

7 thoughts on “Final Thoughts About Augustine’s On the Trinity”