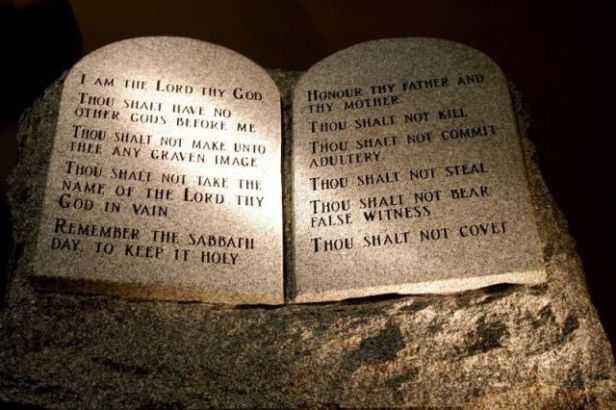 When I evangelize on the streets, anyone who gives me the time of day readily admits he or she breaks one of the ten commandments. Who hasn’t lied, stolen, or coveted? A lot of people, surprisingly enough, will not admit to coveting (“I have never been jealous of anyone in my whole life.”) Yeah right, but let’s move on.

Some people respond, “How do I know that moral standard in the ten commandments is even true?”

A lot of people trained in the Way of the Master method of street evangelism would not know what to say. Perhaps, the following may help.

In such a conversation, I usually respond with that:

For when Gentiles who do not have the Law do instinctively the things of the Law, these, not having the Law, are a law to themselves, in that they show the work of the Law written in their hearts, their conscience bearing witness and their thoughts alternately accusing or else defending them, on the day when, according to my gospel, God will judge the secrets of men through Christ Jesus.

So, the concept above is simple enough and in my mind very important to understand when evangelizing to a lost world. On a final note, when reading Ezekiel I came across a passage that teaches the same thing that God has never opened my eyes to recognize before:

Therefore, thus says the Lord God, ‘Because you have more turmoil than the nations which surround you and have not walked in My statutes, nor observed My ordinances, nor observed the ordinances of the nations which surround you,’ therefore, thus says the Lord God, ‘Behold, I, even I, am against you, and I will execute judgments among you in the sight of the nations’ (Ezek 5:7-8).

As we can see, Judah is under judgment not only for breaking the Law of God, but they could not even hold the standards of pagans. So, in my final estimation, our problem is not that we have not followed the Jewish Law specifically. The problem is that we cannot fulfill the ordinances of any Law whatsoever. The Jewish Law, the government’s, a foreign nation’s, and our own conscience.

“According to their conduct I will deal with them, and by their judgments I will judge them. And they will know that I am the Lord” (Ezek 7:27).

Seeing that you are such an immoral piece of trash by anyone’s (including your own) standards, don’t you know that you are under a just God’s judgment? And, if so, don’t you want a Savior?

Ed: This article was made when I was a Protestant and upon greater learning and reflection my thoughts may have evolved.

5 thoughts on “Ezek 5:7 and Your Inability To Follow Any Moral Standard”